By vetoing the Syria-Sudan resolution, US has given Israel a licence to kill Arafat. 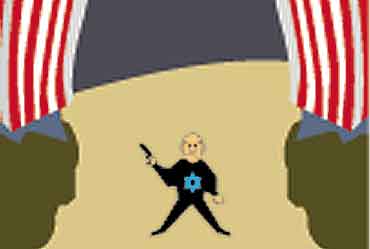 outlookindia.com
-0001-11-30T00:00:00+05:53
ON September 15, the United States took the world a step closer to what English philosopher Thomas Hobbes had called "a state of nature". In the Security Council, it vetoed a Syrian-Sudanese resolution that would have restrained Israel from taking any steps to remove Palestinian president Yasser Arafat from Palestine. Given Israel's appetite for "removing" people permanently with missiles fired from hovering aircraft, a cabinet 'decision' had immediately raised the fear that it intended to kill Arafat. This was specifically not ruled out by an Israeli spokesman shortly after the cabinet took the decision. But it was only when Israel's deputy prime minister Ehud Olmert explicitly ruled assassination in that Syria, with the support of the entire Arab world, decided to take the matter to the Security Council. By vetoing the resolution thus, the US in effect sanctioned Arafat's killing.

The US is, of course, hotly denying any such intention. Its ambassador to the UN, Nicholas Negroponte, justified the veto by claiming that the resolution was one-sided because it did not contain...