Statesman or artful dodger, consummate actor or harried politician.... Is Vajpayee any one or all of these? 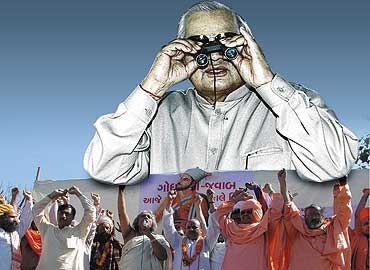 outlookindia.com
-0001-11-30T00:00:00+05:53
TO reveal a closely-held political secret, Prime Minister Atal Behari Vajpayee could not have chosen a more innocuous occasion. His much-reported lunch at 7, Race Course Road on November 16 was, ostensibly, to celebrate the National Press Day. But there was more to it than the light banter the PM exchanged with the journalists present. He sent out a subtle but clear-cut message that day. Vajpayee wanted his moderate face—the one which chafes at the loony right in the Sangh parivar and his own party—to be taken seriously. In addition, there was his unequivocal message: "I am fine and will not step down."

The best construction of the event: a beleaguered PM was reaching out to the press after being constantly under attack by most of his hardline votaries—the most prominent of them being the VHP and its remote kin, the Shiv Sena. The luncheon was an effort to reconsolidate his position, which has looked a trifle shaky after L.K. Advani's elevation as deputy prime minister. Some of the things Vajpayee said during the luncheon indicated that he was trying to chart out a...