The fight against terrorism is new fuel for the BJP, as it fans the flames of communal schisms 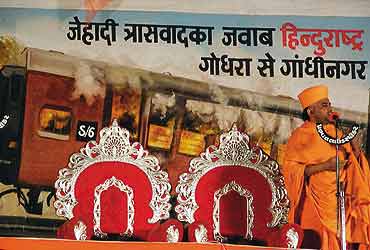 outlookindia.com
-0001-11-30T00:00:00+05:53
The BJP is one party which had always stressed its ideological moorings. But in the Gujarat campaign, terrorism was its mantra—nary a squeak about Ayodhya and other Hindutva issues. The message itself was crude and simple. Terrorism equals Muslims. Muslims equal terrorism. Below are some examples of how the parivar tried to induce a fear psychosis in the electorate: