The Fall Guy, As Always 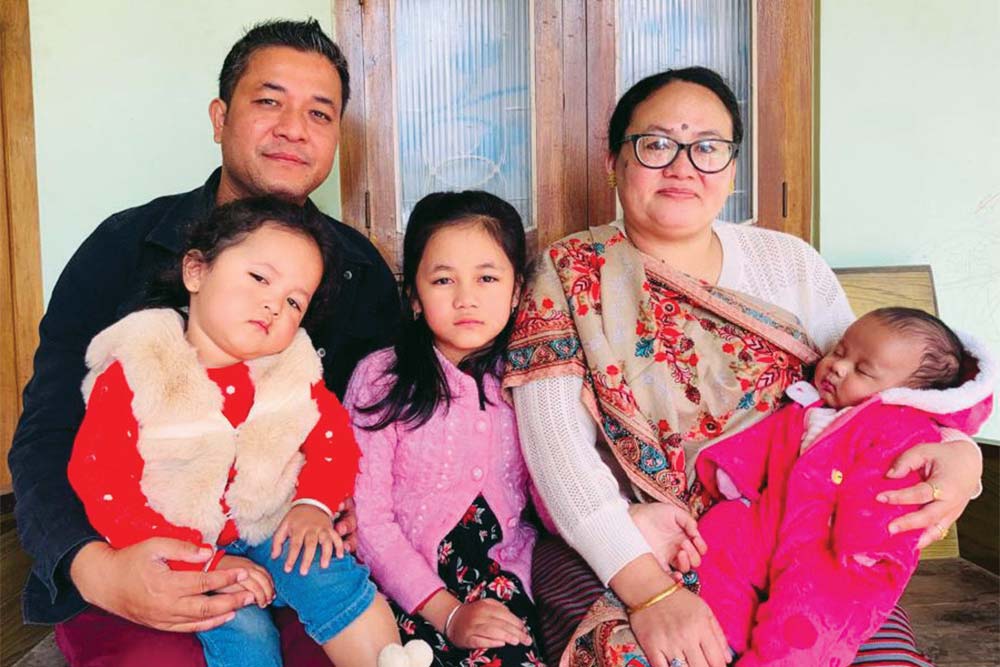 At seven, Kyra doesn’t understand the ways of the world much, except that some “bad men”—as she refers to the police personnel—barged into their home, allegedly roughed up her father and took him away just as the family of five was getting ready for dinner on a balmy evening in mid-May.

Manipur journalist Kishorechandra Wangkhem (in pic with family), 41, was back in prison for the third time in as many years and once again for a Facebook post that criticised claims by some right-wing leaders that cow urine and dung can cure Covid. An activist, Erendro Leichombam, 40, too was arrested for a separate but similar post on FB.

What has riled the family and a large section of people is the fact that both have been charged under stringent provisions of the National Security Act (NSA), within minutes of securing bail in the present case. Kishorechandra was arrested twice earlier, in 2018 and 2020, for separate FB posts critical of the BJP government. Since 2018, he has spent around 250 days in custody.

“It has been traumatic for her (Kyra). She knows something is wrong, but can’t understand what or why…it is emotionally draining,” Ranjita Elangbam, Kishorechandra’s wife, tells Outlook. Kyra is the eldest of three siblings, including ­sister Poinunganbi and nine-month-old brother Wangnganga.

In his FB post following the death of Manipur BJP President, Saikhon Tikendra Singh, due to COVID-19, Kishorechandra had written, “Cow dung cow urine didn’t work. Groundless argument. Tomorrow I will eat fish (sic).” Leichombam’s post said, “The cure for Corona is Not cow dung & cow Urine. The cure is science and common Sense. Professor ji RIP”. Singh served as a professor of ­philosophy before he joined politics.

Kishorechanra’s lawyer Chongtham Victor says police are yet to file chargesheets in the two earlier cases. “Arrests are made for a purpose, but now it seems arresting itself is the purpose, a punishment only to cause harassment and throwing people into jails and impinge upon an individual’s right to freedom of expression,” he says. “Queries at police stations regarding their action are more often than not met with the standard reply of orders from ‘higher ups’.”

In 2018, Kishorechandra had criticised the ruling BJP government for observing Rani Lakshmibai Jayanti and for attempting to draw a parallel between India’s freedom struggle and Manipur’s. “When you appreciate Rani of Jhansi as a freedom fighter covering Manipur, your knowledge is null and….up. Rani Jhansi has nothing to do with Manipur,” he said in the video post, adding it was an “insult to the freedom fighters of ­Manipur.” He was promptly booked for sedition. While granting bail, a court found the video post’s language uncouth, but said it was “a mere expression of opinion against the public conduct of a public figure”.

In 2020, Kishorechandra was arrested for an alleged derogatory remark against the Maram tribe in his Facebook post; it was in response to exchanges between two women, one of whom was the wife of a BJP leader. He was again booked for sedition.

Meanwhile, the distraught family awaits Kishorechandra’s release from jail. “I still have faith in law and believe all will end well,” Ranjita says, citing her husband’s release from prison on two earlier occasions. Given the BJP’s antipathy towards any form of ­dissent, this may take a while.

By Dipankar Roy in Guwahati