They're not on terra firma. But life in these phumdis is coming to a standstill. 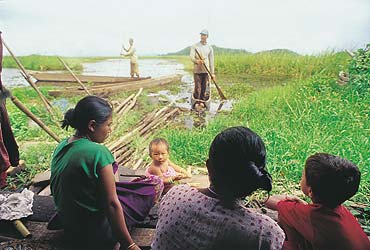 outlookindia.com
-0001-11-30T00:00:00+05:53
Oinam Rajen quit studies after finishing his matriculation four years ago. His father, Oinam Kerani, a fisherman, needed him to stay on the phumdi on Loktak lake to help him. So Rajen stays on and off on this floating island, less than 300 sq ft in size, under a thatched roof and makes a living out of selling fish in the capital Imphal. But one day, Rajen wants to own a hotel on the mainland. Till then, the phumdi is his home.

But L. Chauba, 46, knows no other way of living and has no other ambition in life. He has lived on this water idyll for as long as he can remember. His wife and four children stay with him and help him fish. But it gets less idyllic by the day.

The phumdis are heterogenous masses of soil, vegetation and organic matter in various stages of decomposition. They float on the lake, with about one-fifth of the surface above water, and four-fifth under. Local fishermen improvise on these naturally formed floating islands by securing them with ropes, bamboos and nylon nets, and make them into dwelling units.

There are at least...

More from Nitin A. Gokhale