The Brink Of Deterrence

Success in brinkmanship on an occasion is no surety against failure in the next. The bluff is called, sooner or later. 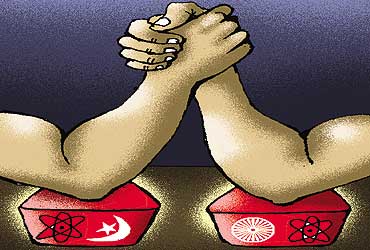 outlookindia.com
-0001-11-30T00:00:00+05:53
With an assist from the United States, Indian and Pakistani leaders succeeded in avoiding a war this summer, but they remain at loggerheads. Official communications have not resumed and military forces remain in the field, ready to fight. Both New Delhi and Islamabad have, however, expressed satisfaction with the strategy and tactics employed during the crisis, which relied heavily on brinkmanship and deterrence. This confidence seems misplaced and could lead to another, even more dangerous, confrontation later on—unless difficult steps are taken in both capitals to tackle the issues prompting the recurring crises.

National leaders draw lessons from N-tinged crises. After the Cuban missile crisis, US and Soviet leaders established the 'hot line' and negotiated a nuclear test ban treaty. After a war scare in 1983, nuclear risk-reduction centres were established, and both countries negotiated an accord to eliminate dangerous missiles from the European theatre. During the Cold War, the prospect of nuclear miscalculation was profoundly disquieting, prompting redoubled efforts...