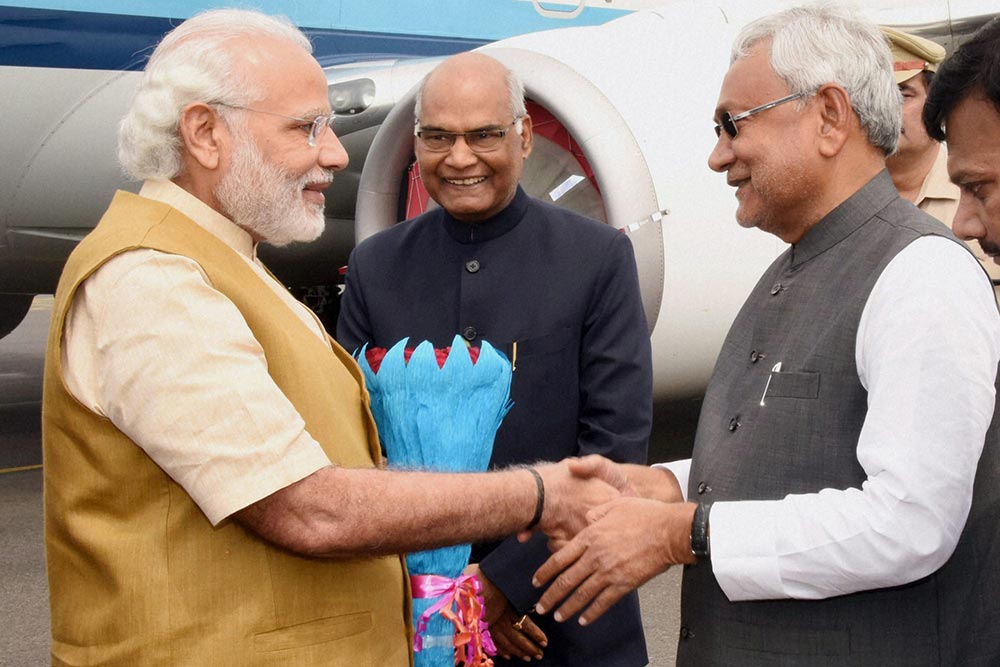 Arch Ally?
Nitish and Modi during the latter’s visit to Bihar in 2016
Photograph by PTI
Bhavna Vij-Aurora July 28, 2017 00:00 IST The BJP’s Takeover Orchestra

On July 26, Bihar went from blue to saffron in the country’s colour-coded map that is kept in BJP president Amit Shah’s office. The blue on the map signifies non-BJP ruled states. As the colour blue shrinks some more, so do the chances of Opposition putting up a joint fight against Narendra Modi in 2019.

Twenty months after losing Bihar to the Mahagathbandhan (Grand Alliance) comprising RJD, JDU and the Congress, the BJP has bounced back to form government in the state. Party leaders are quick to give credit to ‘master-strategist’ Shah for out-manoeuvring the Opposition not just in Bihar, but effectively ensuring it remains in disarray at the national level.

The BJP had managed to win only 53 seats—58 along with its allies—in a 243-seat Bihar assembly in 2015. The party had been bristling ever since it lost the state despite riding the crest across the country. In addition to the Opposition uniting against it, senior leaders of the party also believed that RSS chief Mohan Bhagwat’s statement on reservations, in the middle of...