Laloo's filmi fan club's swelling. But some call him a 'tourist' attraction. 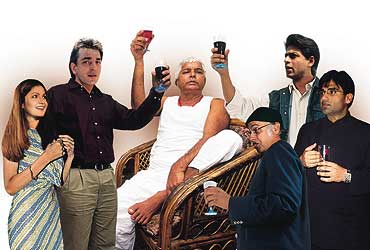 outlookindia.com
-0001-11-30T00:00:00+05:53
Politics and movies make cosy bed-fellows in India. But when bhai-infested Bollywood begins serenading Laloo Prasad Yadav, lawless Bihar's discredited supremo, you could say the synergy's really on. In the past year or so, Laloo, Indian politics' most cunning jester, is being courted by Bollywood like no other politician. Once apprehensive of even visiting his fief, plane-loads of Bollywood performers, directors and producers have been making a beeline to his fabled Anne Marg residence in Patna. Most say they're bowled over by Laloo's campy and gross-out wit.

So much so that controversial filmmaker Mahesh Manjrekar, the latest to join Laloo's fawning fan club, has decided to christen his forthcoming film on the Bihar politician, Padmashree Laloo Yadav. Padmashree is apparently the name of the flick's heroine (to be played by Diya Mirza), but it's a clever, hard-to-beat pun. Laloo will be played by B-list actor Sunil Shetty, and Laloo even approves of Manjrekar's choice because Shetty's "hairstyle resembles mine". It's difficult to see how though.