The Babu's Printed Word Atop The Tower Of Babble

'Native' literatures run close to the living nerve, but English too must find its way to Imagining India and, in the process, enrich itself by looking beyond its class horizons 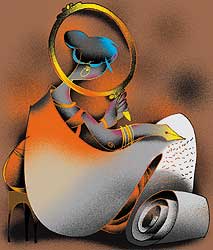 "Out again, on the unplumb'd, salt, estranging sea"

India is a country made for the valourisation of exile, much like Ireland was over a hundred years ago. We look up in awe at those who have left us: their lives forged under alien skies appear imbued with ideas, possibilities and action that have validated their departure. Closer to the bone, we are diffident at their implacable separateness, their singular distinction of not being, entirely, in and of this land. Consider the gifts of exile from our own history: Mahatma Gandhi's moral agonising matured and fructified during his years abroad; Subhash Bose's anti-imperial swagger, however ephemeral, was egged on in Berlin and Tokyo. On a cold evening in London, thoughts of a galaxy of our nationalist leaders shuffling down those pavements all those many years ago, dreaming their impossible dreams even as they were dwarfed by stone and looks of sly contempt, could ambush a lonely Indian in his reverie.

However, since it began to ride the rising curve in the '70s, exile has lost much of...