'That Music, That Culture Is Dying'

Age is just a state of mind. Lata tells Neelabh Mishra she doesn't feel old at all, but doesn't always agree with all that is new. 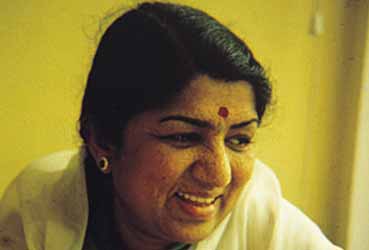 How do you feel on approaching 75?
Just that one more year of my life is over. I don't feel I am turning 75. If your heart is young, your voice stays young too.

What do you feel about the changes in Indian film music over the years?
Earlier there was Bengali and Marathi influence on Bombay film music. Then the Punjabi influence came. Then once again with Salil Chaudhury, Hemant Kumar, S.D. Burman and R.D. Burman, the Bengali influence became dominant.

In the Sixties and even till 1980, our film music was very good. But then the older lot passed away. And today, remixes and piracy have destroyed music.

Where will Hindi film music go from here?
Whatever happens, this trend of remix and piracy is not good. That music, that legacy, that culture is dying now. Everything is fading out. I also sing rarely now.

Which is your all-time favourite song?
I like a lot of my film songs, but my favourite is 'Ayega aane wala'. Among my non-film songs, I like the Meera...