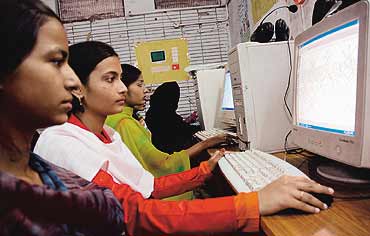 outlookindia.com
-0001-11-30T00:00:00+05:53
When Som Trivedi began a computer training centre for girls in a poor Muslim locality in Kanpur, he wasn’t sure what kind of response he would get. For the first few months, there were no takers. Only a few young girls, mainly the children of coolies who work in the nearby railway station and tanners in the leather factory, ventured inside.

But with the help of his team, project coordinator Ujjwala Subhedar, community liaison Mohammad Sharif and mobiliser Noor Begum, he slowly made progress. Recalls Sharif: "We had to go door-to-door and bring the parents here, show them this was a safe place for their daughters. We explained that a three-month course here—which costs just Re 1 a day—would give them a chance to earn Rs 4,000-5,000 a month."

Kaynat Ahmad is a confident, smiling 18-year-old. When she started on the course, she was very shy. "I used to keep running away from the centre." She used to make Rs 300 a month teaching at a local school. After the course, Trivedi and his team got her a job as a data entry operator at a...