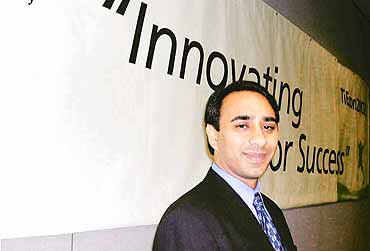 outlookindia.com
-0001-11-30T00:00:00+05:53
The poverty in India is disconcerting," says Vikram Bayana Akula. "I just thought I must do something." That’s how this story began in the interiors of arid Andhra Pradesh.

In 1990, Akula moved to Zaheerabad in Medhak district to work with Deccan Development Society, an ngo. "When you see the people suffer, make sacrifices, and when you experience the unstated intimacy of this suffering, only then do you realise the brute reality of poverty," he recollects. "I didn’t speak Telugu, nor did I understand village life. By the end of it I had picked up Telugu. Nothing was hidden from me."

Akula, who grew up in Schenectady, upstate New York (where father A.V. Krishna is a surgeon), encountered poverty first hand earlier while visiting relatives in Medhak. "It’s a tragedy that we nris, who can do a lot, are not doing enough. We have the skills to solve the problems," he says.

The year that Akula spent in Zaheerabad transformed him forever. For the past 12 years, he’s worked tirelessly to help the impoverished people of this Deccan region. Inspired by Mohammad...