Taking It To The Streets

In this physical, psychological war, Saddam surprisingly is still ahead. Sacking Baghdad will be no cakewalk. 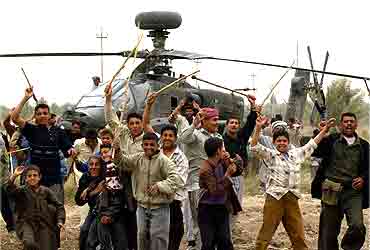 outlookindia.com
-0001-11-30T00:00:00+05:53
Just a few weeks ago, millions of Shiite Muslims were flocking to al-Najaf, south of Baghdad, as they do every year to commemorate the death of the revered Imam, Ali. The bustling throng kissed the fence protecting Ali’s tomb and remembered him in customary outbursts of fervour. But Najaf has been transformed now, witnessing to its east a fierce battle in which the US claims they have killed 200 Iraqis.

A day after the blow, though, Iraqi TV broadcast images of Iraqi soldiers, at an unknown location in the south—where coalition soldiers have certainly left their mark, having poured in from the Kuwaiti border—training and preparing themselves for war. It was as if to say: "It’s not over yet. You’re not rid of us yet."

One of the biggest surprises of this war has been the Iraqi military’s resilience against a coalition many times larger and better equipped. The one question being asked of coalition commanders: did you expect such resistance?

President Bush and Tony Blair, at a joint briefing last Thursday, brushed aside any suggestion of surprise. Bush...