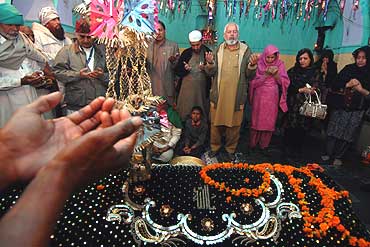 outlookindia.com
-0001-11-30T00:00:00+05:53
Seventy-five-year-old Syed Dilshad Husain slept with a heavy heart on the night of December 4 in Batala’s humble Abhi Hotel. For years, he had fondly nursed the memory of his ancestral village Masanian, in Punjab’s Gurdaspur district, and the burial place of his uncle, Syed Abrar Husain. Dilshad was born in 1933, years after Abrar’s death, but a strange bond seemed to connect them across time. Abrar used to visit Dilshad in vivid dreams, in which he could even smell the sweet tobacco infusing his uncle’s breath. Abrar would talk to him and lead him through life’s many ups and downs, he would be his invisible friend, philosopher and guide.

Dilshad, along with other members of the extended Gilani family (who formed the entire Muslim population of Masanian), was compelled to leave their homes and fields, and the resting place of this beloved uncle, to make a new home in a new country. In 1947, it could not have been any other way.

Early in December 2008, when Dilshad made the journey back from Lahore to Indian Punjab across the...