Gruesome! It keeps getting bloodier by the scene, yet remains curiously engaging. 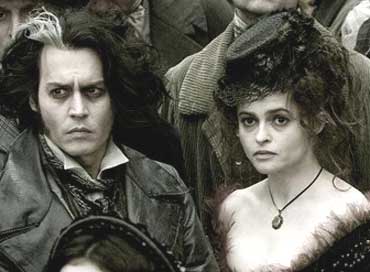 Some years ago, Lars Von Trier made that remarkable Bjork-starrer Dancer in the Dark that gave a grim and gloomy spin to the ordinarily happy and feelgood musicals. Sweeny Todd garnishes it with liberal helpings from the horror and slasher genre. Of course, the film does have songs and melodies aplenty, but infinitely more blood and gore. It keeps getting bloodier by the scene, yet remains curiously engaging.

In two words, Sweeny Todd is a revenge drama. Benjamin Barker, the barber (Depp suitably twisted again), returns home to London in the new avatar of Sweeny Todd dying to wreak vengeance on the lascivious Judge Turpin (Rickman) who had torn him apart from his ‘beautiful, pious, naive’ wife and little daughter. The past is quickly encapsulated and done away with in one scene. The stress is on the present, the...