A reason why this broth of a film is so inedible could be because the script has been credited to several writers. 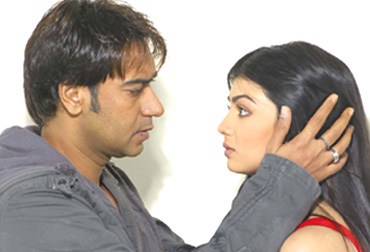 Amongst some distinct aspects of Delhi are its black and yellow cabs and the affable sardarji drivers. In Sunday, the Delhi cab is a bright red Ambassador driven by a bloke (Warsi playing to the gallery) who is totally Bambaiyya in demeanour. In fact, every character seems totally out of place in the city where the film is located, be it the girl in the centre of danger (Takia) or the cop with attitude (a non-hip Devgan sporting the same swagger and fake intensity). Sunday bases itself in Delhi but unlike Khosla Ka Ghosla, it doesn’t tap into the spirit of the capital, its people and humour at all. It merely uses the city’s monuments and ruins as picture postcard backdrops.

Perhaps locational integrity is a bit much to ask from a flick which aims to be just an ‘entertaining comic-thriller’. But even here it...