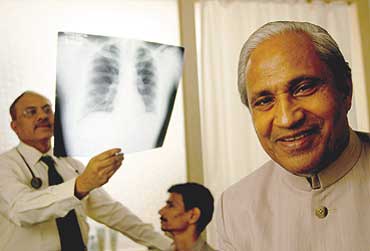 outlookindia.com
-0001-11-30T00:00:00+05:53
Excitement is in the air at pharma firm Lupin. A new anti-TB molecule the company has been working on since 2001 is in Phase I trials—pre-clinical studies have shown great promise. If all goes well, the new drug Sudoterb (named after team leader Dr Sudarshan Arora) could be in the market in four years.

What is so special about Sudoterb? A dramatic reduction in treatment period, from the present seven months to just one dose daily for two months, if used in combination. Used by itself, four months. It will be less toxic than existing drugs in the treatment of multi-drug-resistant (MDR) TB.

Despite all medical progress, TB remains the biggest killer of all. There are 20 million active carriers of the disease and three million die every year, of which a fourth are from India. Eight million new cases are added every year—three million from India. And these figures don’t include hiv positive people who mostly succumb to TB.

But not a single new molecule has been discovered for its cure in the past 40 years. The same drugs, in combination,...