Bringing down the house; Sugar daddies pass the salt; Till Pappu goes bust; Spectres of Ayodhya; The identity crisi of 'true' Hindus and The next industrial revolution 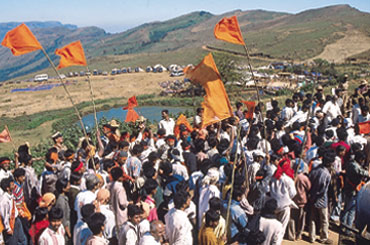 outlookindia.com
-0001-11-30T00:00:00+05:53
BANGALORE, KARNATAKA
Spectres Of Ayodhya
The fires were originally stoked five years ago. But a fresh dose of fuel, courtesy VHP general secretary Praveen Togadia, has caused much embarrassment to chief minister S.M. Krishna. At the annual Datta Jayanti celebrations recently, Togadia described the Guru Dattatreya-Baba Budangiri shrine in Chikmagalur as "the Ayodhya of Karnataka". He said the "Datta Peetha belongs to the Hindus" and rituals should be conducted on Hindu lines.

For years, the dargah had been an exemplar of Hindu-Muslim amity in the state. That is, till five years ago, when the Bajrang Dal made it the object of an acrimonious battle for turf, vowing to "liberate" it.

Togadia’s statements were ignored by the state government till veteran Congressman C.K. Jaffer Sharief shot off his resignation to party president Sonia Gandhi. His complaint was that, as elsewhere, the minorities were being taken for granted by the party in Karnataka, since...