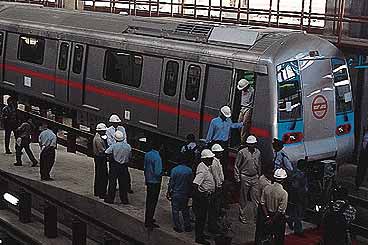 outlookindia.com
-0001-11-30T00:00:00+05:53
DELHI
The Capital Gets Itself An Underworld
Delhi’s netherworld, after four years of frenetic activity and eager anticipation, has finally started throbbing. Last week, the much-awaited first metro rail rolled out of Delhi Metro Rail Corporation’s Shastri Park depot after it was flagged off, on a test run, by deputy prime minister L.K. Advani. He was joined, among others, by Delhi chief minister Sheila Dikshit.

After Calcutta—which got its Metro back in the mid-’80s—it’s time at last for Delhi to join the subway league of London, Paris and New York, thanks to the ambitious Rs 12,000-crore Indo-Japanese project.

The first 8.3-km stretch between Shahdara and Tis Hazari will become fully operational by December. The trains, supplied by a South Korean consortium, will run at a frequency of eight minutes, which is supposed to gradually improve to a train every three minutes, ferrying 23 lakh commuters daily.