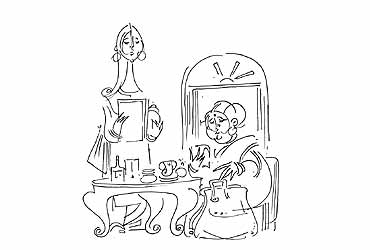 outlookindia.com
-0001-11-30T00:00:00+05:53
It was in March, and about the time when the heat is oppressive and clings to the skin like a pimple, that amma arrived by the last flight from Bangalore. I had been waiting at the airport for over an hour. I saw her with a small suitcase and a large handbag hastening towards me to make up for the delay. She had grown old.

At the flat in Bandra, she removed her slippers behind the door, then with a critical eye scrutinised the guest room. She unpacked immediately. She set her gods out first on the table—thumb-sized idols in silver and brass, a packet of incense, and a brass pot the size of a fist. She would demand rice-grains in the morning to fill up the pot, then jab the incense sticks into them.

She handed me a large purse containing money and a small pouch of jewellery. "Keep them safe, ma," she said, "also this file." I took it from her. "They are Tata Steel shares. So much they have fallen. This morning they were 189.6. We've decided to sell them." All shares had stumbled steadily downward after the '93 bomb blasts in Mumbai.