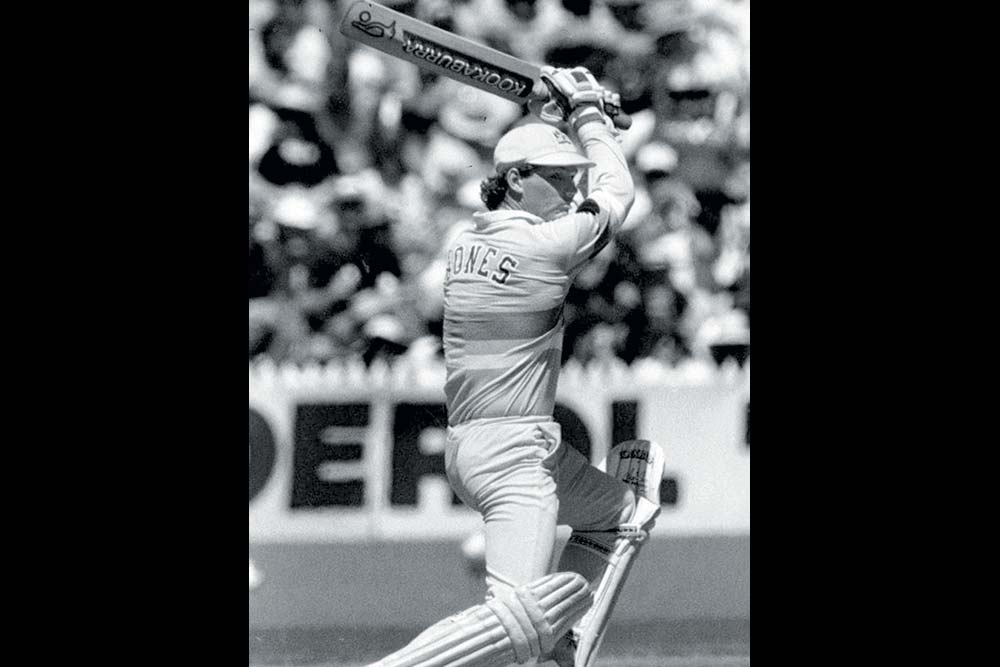 “I was on the verge of fainting, unable to continue, when Allan Border, my skipper and partner at the other end said, ‘Take this Victorian away and send in someone tough…a Queenslander’, to the 12th man who was standing over me as I lay down on the grass at Chepauk, soaked in sweat with not an ounce of water left in my body. Those words were enough to provoke a brash, 25-year-old with an exaggerated sense of self-worth, to get up and continue batting...the rest, as they say, is history!”

I’d heard Dean Jones narrate this story about the 1986 tied Test between India and Australia, played in Madras, numerous times: at a casual dinner, during cricket shows on TV (where we worked tog­ether), at the Chepauk while we were covering an IPL final, on stage during a lecture, and every time we drove past the Doordarshan office in Delhi, where he would never fail to add that the tapes that had the original footage of the match had been wiped clean because someone at the archives dep­artment of the national broadcaster thought it’s best to re-record a daily soap over it.

Yet, one never got tired of listening to Deano’s yarns. That’s what good storytellers do: lay down the red carpet for you to walk into their world and then stimulate your senses into believing that you were there too. During the decade that I worked closely with him (2006-2016), Deano took me on a ride to the Sydney Cricket Ground of the 1990s, where he dared Curtly Ambrose to remove his wristbands. To Calcutta, where he got emotional watching a hundred thousand-plus Indian fans cheer him and his Australian teammates for being crowned the new world champions. Heck, even to a private dinner in honour of the great man, Sir Donald Bradman, describing how he celebrated scoring his world record score of 334 by having a quiet cup of tea in his room, alone!

My favourite Dean Jones tale, though, comes from Australia’s tour of New Zealand in 1987 where he referred to Richard Hadlee as an ordinary bowler. That was enough to get the Kiwi legend fired up as he went onto claim Deano’s wicket three times in that series. When asked about his goof-up, Jones, in his typical dry wit would retort, “Yeah, he got me out a few times…and then the queen of England heard about it and knighted him.”

Post-retirement, Deano used this craft of storytelling to his advantage to emerge as a leading commentator of the game. Though his one-time indiscretion of using the ‘T’ word for Hashim Amla in 2006 did put the brakes on his fledgling career as a broadcaster, his insatiable appetite for watching and talking cricket couldn’t keep him away from what really was his raison d’être.

That he would go on to pioneer phrases like ‘going…going…gone’ to describe a six or ‘threepeat’ as a synonym for a hattrick came as no surprise considering his penchant for innovation. And when most former cricketer-turned-commentators considered alternative and light-hearted analysis infra dig, Jones didn’t mind putting his hand up. His alter ego, Professor Deano, that came to become a brand of its own was, similarly, a res­ult of his inclination to experiment and take risks.

Having observed him play a temple priest, a tuk-tuk driver, a veterinarian and even a cheerleader—all in an effort to  deliver his cricket messages in a unique and engrossing manner, and never once complain while doing that, is a true testament to his passion tow­ards storytelling and cricket. That this sort of analysis has now become commonplace, especially after the advent of IPL, only adds to his legend of being a trailblazer. 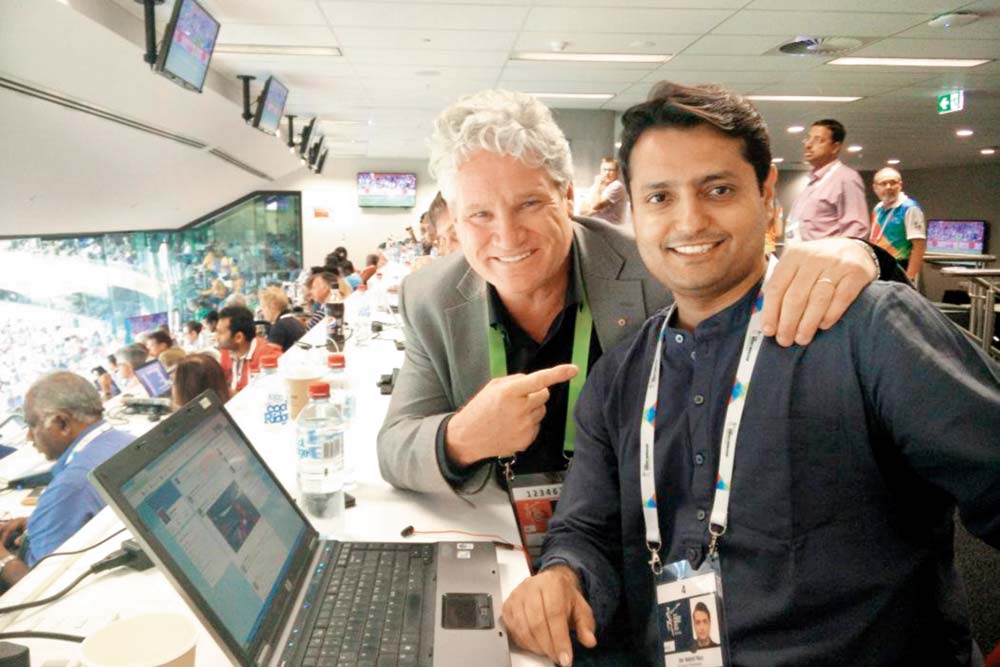 The author with Dean Jones in the commentary box.

Of creams and shades

Dean Jones was a trendsetter. He was among the first to sport sunglasses and wear zinc cream on the field. The glasses were his way of spotting the white ball in the light blue background whilst the zinc cream came about because his skin was extra sensitive to sun rays—which also explains why he wore long sleeves during his playing career.

But to build Deano’s reputation as a pioneer by only highlighting his choice of accessories would be a disservice to his cricketing prowess.

His alter ego, ‘Professor Deano’, that came to become a brand of its own, was a result of experiments and risks.

We’ve all played our share of gulli/backyard cricket where we’ve dressed up as, and pretended to be, our favourite batsmen. Growing up in the ’80s and early ’90s, my friends would choose Viv Richards, Kapil Dev, Imran Khan, Martin Crowe. But I was always Dean Jones: sporting dark glasses and zinc cream on the lower lip to look the part. By the time satellite TV came around and fans in India saw live, coloured images from the 1992 World Cup, many wannabe Deanos mushroomed across the gullies and maidans across India.

The six-foot-two Victorian, with his flamboyant style of batting and athleticism, had captured the imagination of kids across the cricketing globe. And if you saw him on the cricket field at the peak of his powers, it wasn’t difficult to imagine why. Charging down the wicket to fast bowlers and averaging 45 in ODI cricket while maintaining a strike rate of 70-plus was unheard of in those days. His lightning quick pace while running between the wickets and ‘diving on the outfield’ were aspects of his game that were ahead of their times, making him really the first real short-format specialist.

Only last month, as Deano was stuck inside his Melbourne home due to the Covid-enforced lockdown, I got him to join me for a chat on Insta­gram. As we reminisced about his time as a player and commentator, he opened up the biggest regret of his life. “I probably shouldn’t have retired from one-day cricket so early,” he told me. “That remains my biggest regret. I retired at the age of 32...but I sensed I wasn’t getting the love or res­pect as a one-day player by then.

“Imagine, I was number two/three in ODI rankings and they dropped me from the last ODI vs South Africa (1994). Back then, the selection on tour was done by a five-member panel that consisted of the captain, the vice captain, a selector, the coach and a senior player…all five of them voted against me! Four out of those five weren’t even good enough to tie my bootlaces and yet they voted for themselves ahead of me. That’s when I said, this is just boys picking up their boys…I’m done!”

Only he wasn’t done. His second stint in cricket—as a commentator and analyst—gave him the love and respect he so desired from the game.

During our times together—in TV studios and outside—we often sparred over various things cricket. One such argument centred around his firm belief that M.S. Dhoni would finish inside the top three of India’s greatest-ever cricketer, something I was never willing to buy; especially with Gavaskar, Kapil, Sachin, Dravid, Kumble, possibly even Kohli on my mind. We finally settled it—“We’ll talk when MSD retires from all forms of the game”. In a cruel twist of fate, Dhoni is playing an IPL match even as I write this.

In a career spanning 52 Tests for Australia, fifty-two, quite naturally became Jones’s favourite number. The Professor turned 52 in 2013 and dec­reed, “Every birthday of mine from hereon would only be my fifty-second!

Come to think of it, Dean Jones should have never bothered about the clock ticking. He was, after all, always ahead of the times.

(Naz is a freelance journalist  and  author of Mira­cle Men: The Greatest Underdog Story in Cricket)