Maharaj As King Or Everyone's Prince?

Sourav Ganguly’s innate charisma and sense of timing makes him unputdownable. His articulation and street-smart wit as a TV show host have sustained his popularity, writes Ruben Banerjee, Outlook's Editor-in-Chief 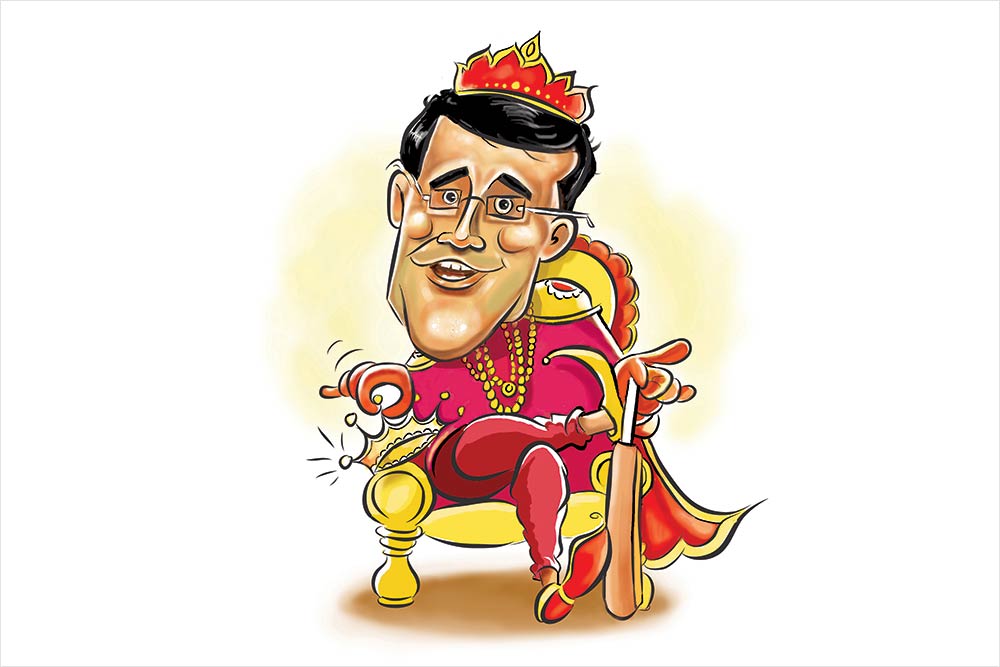 I hold a grudge against Sourav Ganguly, despite being his huge fan like every other Bengali and a sizeable section of fellow Indians. My disappointment with Dada is purely personal. Trailing his on-field exploits, particularly those exquisite off-side drives, gave a high that seemed to infuse a purpose in life in an otherwise predictable existence as an NRI in West Asia’s deserts. I wished to feast on it more and track Ganguly in action in greater detail on an ultra-big-screen TV. But barely hours after I burnt a big hole in my pocket and brought the set home, Ganguly announced his retirement. I felt deprived and devastated.

Some eleven years later, I am not too sure whether I should be still shouldering the sense of disappointment that I have been silently carrying since that crestfallen evening in 2008, or rejoice in delight since Ganguly is back with a bang—this time at the helm of the BCCI. Nothing that Ganguly does goes unnoticed and his reinvention as the country’s top cricket administrator has predictably ignited fresh speculation that his next avatar could be that of a politician, with Dada taking on Didi in his home state. As tongues wag, rumours float and conjectures gain currency, I remain undecided whether it is good news or bad for legions of Ganguly fans.

The dilemma is distinct since Ganguly has been one feel-good factor that we do not wish to see diminished or dented in any way. Politics with its umpteen prospects could certainly open the door for him to many possibilities. If on the right side of the equation, he could even possibly be the highest elected official of West Bengal someday. But can he hope to sidestep the filth and survive the pettiness that inv­ariably envelopes politics and continue to be perceived as perhaps the most popular Bengali across all divides?

For all practical purposes, there has never been a Ganguly-like phenomenon in Bengal ever. Bengalis, of course, have always had their share of icons—Tagore, Netaji, Mother Teresa, Satyajit Ray et al. Add to them Nobel laureates Amartya Sen and Abhijit Banerjee. And you realise Bengalis have never really been hard-pressed to proclaim their self-att­ested pre-eminence over others.

Bengalis suffer from the guilt of having slipped on almost all parameters.... Amid this gloom arrived Ganguly.

But Ganguly, with his unmatched mass appeal, is a sensation unrivalled, rightly dubbed the Prince of Calcutta. Ever since he scored those two unblemished back-to-back centuries on debut in England, the natives back home experienced an exhilarating rej­uvenation that they possibly have been thirsting for long. Every time Ganguly stepped out to hit those famous giant sixes with so much ease and élan, his fellow Bengalis—hostage to a long communist rule pockmarked with bandhs, ind­ustrial decline and painful status quo—felt a sense of liberation they longed for. And when Ganguly took his shirt off and twirled it in exhilaration on the Lord’s balcony, he gave his followers the hope that even they could flex their muscles, no matter how emaciated they were.

In more subtle ways than one, Ganguly epitomised the suppressed aspirations of Bengalis. Though they were proud of their Tagores and Rays, not everyone had the int­ellectual or academic heft to fathom their contributions. Ganguly was a class apart. His field of work was something that everyone related to in a sports-crazed state, and when he blazed the field, the collective hopes of Bengalis soared too. With every shot to the boundary, Dada transcended class and economic barriers and became an unparalleled darling. His dizzying achievements followed by his dramatic banishment from the Indian team and subsequent return made for an exceptional script. They encapsulated life’s daily struggles, the quintessential ups and downs of a valiant hero battling powerful odds, including Greg Chappell.

Bengalis presumably suffer from an impotent guilt of having slipped on almost all development parameters and forfeited their place as the country’s leading province. That the old saying “what Bengal thinks today, India thinks tomorrow” rings hollow adds to their discomfort. Amid the general gloom arrived Ganguly and his heroics were readily seized upon by many for an easy emotional redemption. That Dada will be deified never defied logic.

There is, of course, nothing special in cricketers and film stars enjoying mass adulation. But the one res­erved for Ganguly in Bengal is at a different level and runs far deeper, possibly not experienced by even the likes of the talented Sachin Tendulkar or the run-making machine Virat Kohli. Unlike Tendulkar who had Gavaskar’s legacy to contend with in his home state or Kohli who has had Kapil Dev as his predecessor, Ganguly faced little competition in cementing his place in the heart of his fans. Pankaj Roy, the only other noteworthy cricketer from the state, played in the 1950s. So, by the time Ganguly donned the India colours, there existed a huge catchment of Bengalis craving to reclaim their lost glory. For them, the former Indian captain’s bat did the talking for them.

Ganguly’s innate charisma and sense of timing have helped the collective cause. His articulation and street-smart wit as a TV show host have sustained his popularity. He also has kept everybody happy, cosying up to the CPI(M) first and Mamata later. But can his all-enc­ompassing lustre survive an innings in divisive politics? The worry is Maharaj, as he is known, may become the king, but may cease to be everyone’s Prince.