Live sports will never be the same again minus the spectators. Team sports always rode the roar and chants of the fans 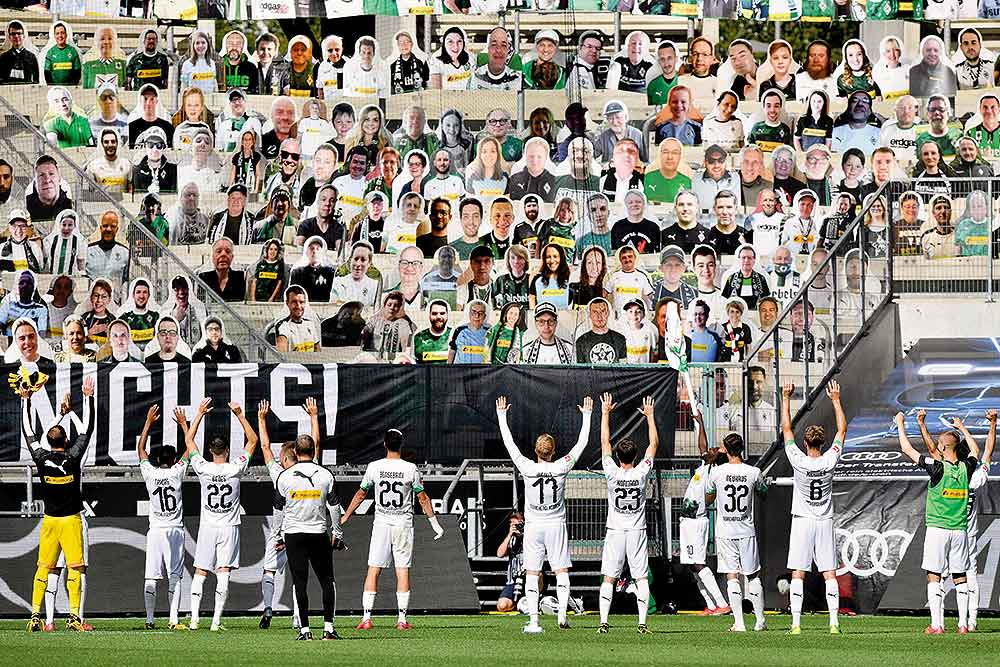 Fans ahoy
Players try to motivate themselves before cut-outs that stand for spectators in a German stadium during a Bundesliga match.
Photograph by PTI
Soumitra Bose July 09, 2020 00:00 IST Live Sport Adopts Play Safe Policy, Will Adrenaline Rush Be The Same Again?

On a mild winter’s afternoon on February 22, 2009, Salt Lake Stadium in Calcutta—that bursting cauldron of heaving, imprecating football enthusiasts—witnessed something unusual. Subhash Bhowmick, the newly-appointed coach of the East Bengal team, hurriedly walked towards a section of the stands packed with red and gold shirts, banners and festoons. The burly coach took upon himself the onerous task of cheerleader, goading thousands of rabid East Bengal fans to keep up their partisan chants with over an hour to go before kick-off. It was an I-League match; East Bengal came into the showpiece ‘derby’ with a depressing record against arch-rivals Mohun Bagan.

In nine derby matches starting August 2007, East Bengal had lost to the green-maroons six times. A hassled club management had sent an SOS to Bhowmick, holidaying in Shantini­ketan after resigning as Salgaocar coach, to save the club from the continuing ignominy. On Christmas Day 2008, Bhow­mick replaced Stanley Rozario for the upcoming IFA Shield and the remainder of the I-League...