Hand Of God, Feet Of Clay

Maradona! An Englishman, still bitter over that blend of magic and sleight of hand at Azteca, offers a tribute to the flawed genius. 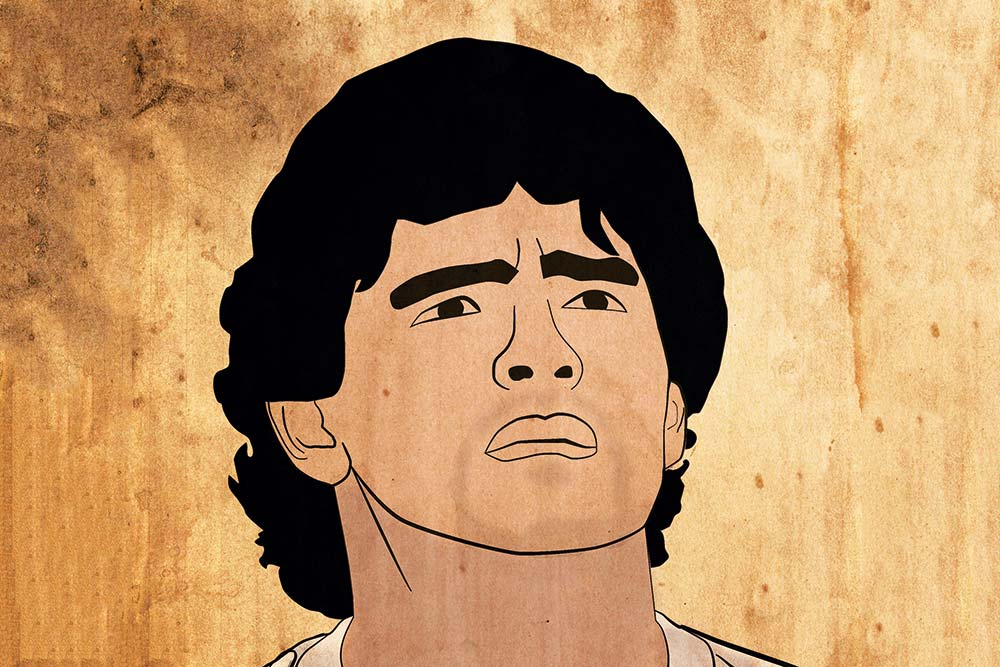 A magician, yes. A genius, without doubt. But also a flawed human who repeatedly hit the self-des­truct button faster than the ball sprung from his famed left foot. I was fortunate enough to be once in the presence of Argentinian football deity Diego Armando Maradona, as fleeting as it was. That came at the 1998 France World Cup final, in the media sector of Stade de France. Only for a small thick-set guy to run up the stairs and sit just behind.He was with his minders, of course, but the aura emitting from the lad from Lanus was awesome. I wanted to ask for an autograph, perhaps a photo, but I remained glued to my seat. It is a measure of his footballing brilliance that an Englishman, so passionately patriotic and so bitter in the decade spanning the 1980s and ’90s over the simple touch of a hand for all the world to see, was so desperate to share a moment with him. Maradona is a deity in his homeland. My good friend, ex-Middlesbrough and Liverpool striker David Hodgson, lived it first-hand when he worked in Buenos Aires for a year, “They still sell Maradona shirts on street corners and it’s 25 years since he stopped playing.”

The outpouring of grief in Argentina is a testament of that. A three-day period of national mourning, the death threats received by funeral workers for disgracefully taking a selfie with the body, the volume of people on the streets. Maradona was truly worshipped. There is no question of his footballing brilliance, he sits with Pele and George Best and tops regular arguments in social circles the world over as to which one of the three was best. He was jointly voted with Pele in 2000 as FIFA’s Best Player of the Century.

His second goal of that infamous day in the Azteca put England to the sword and was rightly voted as the ‘greatest goal’ in the history of the World Cup. Just four minutes after blatantly cheating, he took eleven touches of the ball to leave England keeper Peter Shilton on his backside, slipping the ball into the empty net. That was Maradona.

He fitted perfectly into the South American game. Introduced by Europeans, the continent quickly fashioned its own brand of football, a brand that perfectly suited upper body strength, low centres of gravity and balletic changes of direction. These attributes would see him pay the price of brutal encounters with central defenders in Europe.

Born fifth in a family of eight children, he made his professional debut at the age of just 15 and went on to twice switch clubs for astronomical transfer fees. The superhuman talent was there for all to see but the questionable and erratic behaviour of the Golden Boy was still to emerge. A world record fee of $7.6m brought Maradona across the Atlantic to Europe, to Barcelona.

His two years in Spain were blighted by crunching tackle injuries, but his mercurial light still shone brightly despite the regular physio sessions, grabbing 38 goals in 58 games as he almost singlehandedly led the Blaugrana to two successive Copa del Rey finals.  It was the second of these showpiece events where the psychological cracks opened to reveal a superstar with issues. His ability to self-destruct was laid bare for the first time in the 1984 final against Athletic Bilbao.

His ability to self-destruct was laid bare for the first time in the 1984 final against Athletic Bilbao.

In front of 1,00,000 fans, King Juan Carlos and half the country’s population on live TV, the pride of Argentina exploded. The lad from Lanus rolled up his sleeves and took on the entire opposition line-up, not with a ball at his feet, but in a kung fu style mass brawl. Diego’s position at the centre of the enormously embarrassing drama led to him being kicked out of the Nou Camp in disgrace; his last game for the Catalan giants.  A second world record transfer fee, this time in excess of $10m greased the wheels of the move to the Stadio San Paulo, it was a fee that would be repaid ten times over. Napoli was a topflight club, but not one that had tasted much success.

The supporters loved him, he was instantly adopted as a son and a leader, as together they manifested passion and fever. Maradona’s Napoli would win two Scudetto titles and the UEFA Cup. He was so worshipped by fans and club alike, once he had departed, his famed number 10 jersey was retired; no other could wear it. 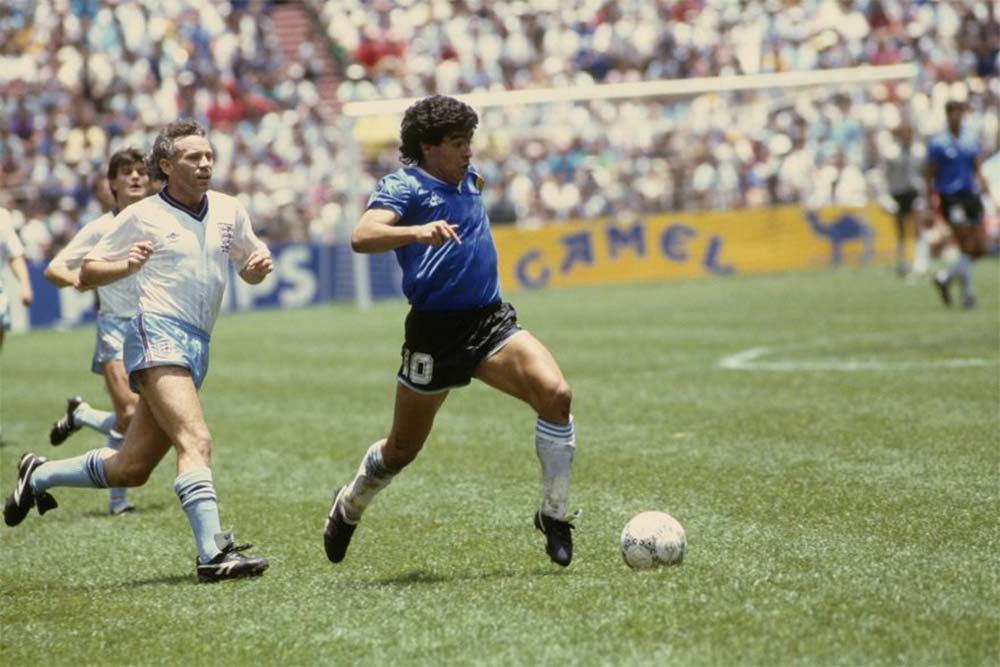 But the move to Napoli, as successful as it was on the field, was one destined to fail for the man himself. Naples itself is home to strong mafia interests and it would not be long before Maradona would be ensnared by those social circles.  The Argentine openly admitted this is where the cocaine use began. Freely available, he was drawn into the worst aspects of drug use, it was the start of the end for his amazing talents. However, the drugs, booze and obesity which would follow, would take a little time to come, there was plenty of football still to be played. He led Argentina to World Cup success in Mexico in 1986, setting the arena afire with the infamous Hand of God goal alongside with the tournament’s best ever. No matter how much pain it caused me to accept as an Englishman at the time, he was truly brilliant.

Maradona’s problems were clearly there. Alcohol had been added to his cocaine use and his behaviour became more erratic. Still magical on the field, he started to miss games for Napoli, skip training sessions, all the time claiming it was down to stress. In 1991, the cult figure was hit hard with a near year-and-a-half-long ban from playing due to his now well-known, cocaine habit. A failed drugs test led to him being unceremoniously banned from the game and Maradona had been stripped of the discipline football gave him, the very discipline he needed to survive. He would leave the club he loved so much once the ban had been served. Huge questions were now being asked about his health and mental state, which were obviously taking a hammering by drugs and booze.

Back home with Newell’s Old Boys, Maradona retained his place with the Argentina national team and qualified for World Cup USA 1994. Sadly, this would be his last international on-the-field action. He played two games in Boston, scoring in the first against Greece but failing a drugs test in the second against Nigeria, and was sent home in shame for doping.

A brief flirtation, playing for Boca juniors brought a close to his playing days, but the abuses of his body were taking their toll. His weight increased, his behaviour got worse. Just ask the journalist Maradona tried to shoot with an air rifle.

Diego went into management, he even led Argentina into the 2010 World Cup finals in South Africa but, by this time, he was well and truly on the slippery slope. Argentina would be eliminated in the quarter finals through to a 0-4 drubbing by Germany, and Maradona would fall out publicly with the Argentine FA. TV cameras caught up with him in 2018 for a documentary about him coaching Dorados de Sinaloa in Mexico. He was obese, unable to talk clearly and needing support to walk. The same year he was seen behaving embarrassingly at the World Cup in Russia and had to be carried out of a stadium. As Albert Einstein famously said, the step between genius and insanity is very short.

Diego Armando Maradona now rests and recovers in the hands of God.

(The author is a football journalist, professional referee and former vice president of Fox Sports)