Speed-Breakers On The Info Highway 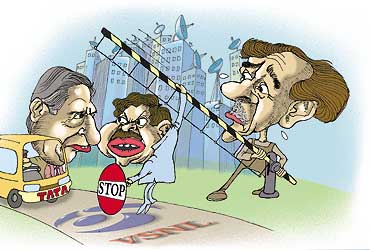 May 28
VSNL board decides to invest Rs 1,200 crore in Tata Teleservices. Pramod Mahajan says the decision makes "a mockery of the disinvestment process."

May 29
Mahajan threatens to move Company Law Board. Rakesh Kumar, government nominee on VSNL board, says decision was not unanimous, as claimed by the Tatas.

May 30
VSNL says Kumar didn't dissent or ask for vote.

May 31
Mahajan tells Tatas to backtrack on decision. Tatas say they will stick to decision.

June 6
After meeting Advani, Shourie and Mahajan announce they have sorted out their differences.