Meyers aims at the age-disparity cliché with two other cinematic chestnuts; Attraction Between Opposites and the Love Triangle 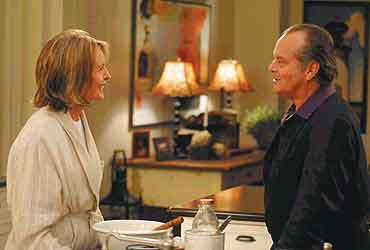 Filmmakers have long known that a faint whiff of scandal is much more suggestive—and absorbing—than the reek of paedophilia. That's why romantic films that play on the attraction between partners of widely differing ages are nearly as old as the movies. These range from the outstanding (Mike Nichols' The Graduate, Louis Malle's Atlantic City, or Billy Wilder's The Major and the Minor) to the frankly terrible (a remarkable number of Lolita rip-offs).

Nancy Meyers' Something's Gotta Give starts out somewhere in the better half of that spectrum. Harry Sanborn (Nicholson) may be in his fifties, but he clearly has a good thing going with younger women, the latest of whom takes him to her mother's beach house for a weekend. Unfortunately, Harry suffers a heart attack, and has to stay on with his girlfriend's mother Erica Barry (Keaton). Which is where Meyer begins juggling the...