With Hurriyat moderate Abdul Ghani Lone's assassination, India's announcement that it intends to hold a free and fair election in the Valley will not only encounter indifference but resistance as well 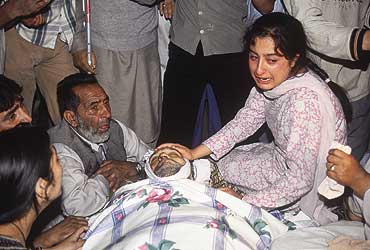 outlookindia.com
-0001-11-30T00:00:00+05:53
The omens were all there. As a 10,000-strong procession wound its way towards the Idgah grounds in Srinagar for a public meeting called by Mirwaiz Umer Farooq’s Awami Action Committee, the anti-India and "jeeve jeeve Pakistan" slogans made it obvious that blood was likely to be spilled before the day was over. The mob (featuring several masked individuals) repeatedly attempted to storm the stage where the Hurriyat leadership was assembled, even targeting journalists who were forced to run for cover. Lathi-wielding, green-clad workers of the Awami committee chased the hecklers away. But they kept coming back to interrupt the speeches of Hurriyat leaders.

The function wound up in double quick time. As Abdul Ghani Lone proceeded to his car, three uniformed men opened fire. The Lone voice of moderation was silenced. He was the third victim of assassination to have fallen on sinister May 21, after Maulvi Farooq (Mirwaiz Umer Farooq’s father) and Rajiv Gandhi. Lone’s PSO died at his side. A grenade flung at the crowd mercifully fizzled out.