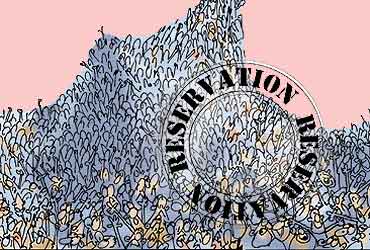 outlookindia.com
-0001-11-30T00:00:00+05:53
"The UPA government will immediately initiate a dialogue with industry and other parties on how best the private sector can fulfil the aspirations of scheduled caste and scheduled tribe youth."
—The Common Minimum Programme of the UPA government

The spectre of reservations on caste basis has been hanging over the Indian private sector for quite some time now, but very few in industry gave it much thought. Very few believed—liked to believe—that it could happen. Now, it suddenly looks real. And at a time when Indian industry finally seems to have learnt the ropes of global business. At a time when it is fiercely fighting an invasion by cheap imports, when our services sector is recognised the world over as an incredibly potent force. A time when people like Italian PM Silvio Berloscuni talks of expanding the G-8 conclave of economic powers to include India and China because "that is where the future lies".

The signs were there in the Congress election manifesto which talked of creating a national consensus on the issue of getting a reasonable share of...