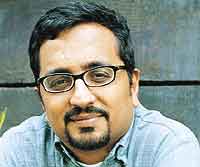 outlookindia.com
-0001-11-30T00:00:00+05:53
Your first film has found mass acceptance.
I think after escapist cinema, the audience was ready for something real. We attempted just that.

Why did Ram Gopal Varma select you to direct this film?
He had his reasons. But I never thought I'd make a Hindi film. I met him through a friend and we immediately hit it off.

How much research did you have to do?
My producer did his bit and the scriptwriter Sandeep Shrivastava and I did our own research.

Encounter killings aren't based on democratic voting on right and wrong.
Agreed. But I see encounter cops taking on a task tougher than soldiers at war. They fight relentlessly.

The second half of the film is very dramatic.
I wanted to show what such killings could lead up to. The cop-gangster relationship is central. One kills for profits, the other to eliminate profits.

How much credit do you give Nana Patekar?
Huge! The way he portrayed the cop made the character alive and interesting.

The sound quality in the film was...