Given the never-ending jostling over the sale of oil PSUs, whatever the PM decides will end up displeasing somebody More Coverage 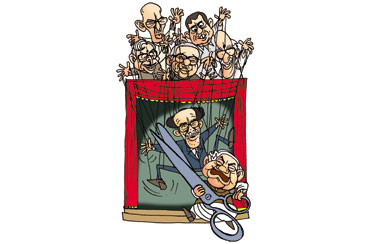 outlookindia.com
-0001-11-30T00:00:00+05:53
Desperate times call for desperate measures. Thus, to find a solution to the present disinvestment wrangle—which has compounded itself into a mini war within the NDA—various options have been mooted by senior politicians, policy-makers and populists. As D-day comes nearer, everyone has jumped into the fray to offer his piece of mind. There's the compromise formula mooted by Arun Jaitley, general secretary of the BJP, another one from the finance ministry, and petroleum minister Ram Naik's old theory.

But as everyone waits for the action to hot up once Prime Minister A.B. Vajpayee returns from Europe, it's clear that each of these options is fraught with problems. And the PM is going to be under attack from some section or the other, whatever path he chooses. "There can never be any consensus over the issue. Vajpayee will have to basically push an alternative down the throats of some of his cabinet colleagues," says an advisor to a cabinet minister.

Currently, it's still difficult to predict what the PM will plump for on the sale of the two oil PSUs, HPCL and BPCL....