On her debut in television with B4U’s Anupamaa 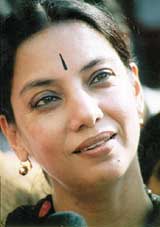 Were you influenced by the success of Amitabh and KBC?
No, I got the script 18 months back. I was just waiting for the right time.

Whats the plot of Anupamaa?
I play a woman who epitomises emotional strength and character.

What is the USP of the serial?
It is not about shrill women talking only of rights. We also talk about our responsibilities.

Do you think such serials actually have a positive effect?
Television can change attitudes by reinforcing a progressive outlook.

What are your other plans?
Im trying to take my play Waiting Room to West End theatre.

Are you also doing films?
I am doing an American and a Hindi film.

What is the latest on Water?
Deepa called me recently to tell me that the project has been...