How does India leave the problem of open defecation behind? 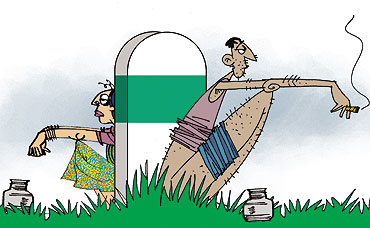 outlookindia.com
-0001-11-30T00:00:00+05:53
Long ago, in the 1960s, goes a story, a rather pucca ICS officer drove out to an Uttar Pradesh village in his domain where, as usual, he found villagers defecating in the open. When they stood up to greet him respectfully, he ordered his chaprasis to confiscate their lotas. He revisited the village a few days later to see if things had changed. They had. This time, the defecating villagers continued to squat and clung to their lotas with both hands.

Four decades later, the government seems to have found gentler ways—and the money too—to make the point. The rural development ministry's annual budget for its Total Sanitation Campaign is zooming—to Rs 800 crore for the current fiscal from Rs 165 crore in 2003-04.

Union rural development minister Raghuvansh Prasad Singh, a starched-dhoti clad RJD leader who can spend an animated evening talking about solid waste, is already pitching for more. The man who has promised, rashly many would say, to make every Indian village free of "open defecation" by 2012, needs every paisa he can lay...