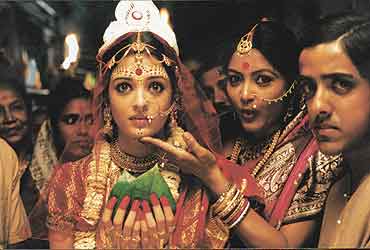 outlookindia.com
-0001-11-30T00:00:00+05:53
Rituparno Ghosh is not exactly what you would call a publicity hound. But he has a smooth, to-the-manner-born way with the spotlight that would put to shame most shooting stars of the Indian dream factory, who stake their destinies on the weekly transience of the marquee—preceded by the dazzle of new-fangled TV promos. He courts PR in a manner that makes it seem it's the other way around.

And this time he has a lethal concoction—Rabindranath Tagore, Aishwarya Rai and a Rs 2.5-crore budget for a Tollywood movie—to boot. So, it's only natural that he be in an expansive mood: "I always thought about filming Tagore's Chokher Bali (Mote in the Eye, officially called Bugbear or Bete Noire), set against the background of the nationalist movement in Bengal during 1902-1905. I've been as thorough as possible in my preparations before we went to shoot."

"At Locarno and other film festivals, where Chokher Bali has been shown, critics have praised our photography, our sets and designs, and other technical details. It'll be screened soon at the London and...