The Vatican gets an Indian flavour. The Mother her due. 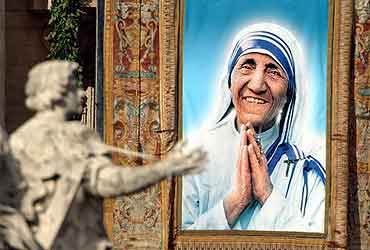 outlookindia.com
-0001-11-30T00:00:00+05:53
"In the process of encountering the world's different cultures, the Church not only transmits her truths and values, but she also takes from the various cultures, the positive elements already found in them."
—Pope John Paul II, addressing the Asian assembly of the Vatican council in 2000

They wear saris, use purifying 'Hindu' symbols such as diyas and incense sticks during worship and sing hymns in praise of 'Yesu Masih' (Jesus Christ) in several Indian languages. They are the Missionaries of Charity, the extraordinary order founded by Mother Teresa in 1950, that now has 4,500 full-timers working in 133 countries.

Last week's ceremony at the Vatican to mark the beatification of Mother Teresa—a prelude to her being formally declared a saint—was startling in its use of Indian or 'Hindu' symbols. The three-hour long ceremony, presided over by the Pope himself, was a grand affair, witnessed by a quarter of a million people crowded into St Peter's Square. Most of the hymns and speeches were in Latin—considered the acme of languages but incomprehensible...