At 16, she's the first Indian woman to win an international badminton championship, the Philippines Open. Hyderabad's new Sania? The champ waves off such comparisons. 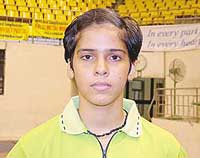 outlookindia.com
-0001-11-30T00:00:00+05:53
Did you know you were about to make history if you won the final against Julia Xian Pei Wong of Malaysia?
Yes, my coaches were telling me about it but I didn’t want to feel any pressure and just concentrated on my game instead.

When did you start playing? Does badminton run in your family?
I started in 1999 when I was nine. Both my parents played the game at the state level.

Your previous best...
The Commonwealth Games where we won the bronze and then the Asian Satellite singles title late last year.

How has coaching under the All England champion Pullela Gopichand helped you?
I was winning at the national level previously but under him I’ve started doing well in international tournaments.

Gopichand’s game was a mentally tough one. Has he trained you similarly?
Yes, he does focus on mental fitness. Before every match, I meditate for 5-10 minutes. And in the court, all I can think of is winning.

What are the weaknesses in your game?
Dribbling near the net, half-smashes and...