Ganguly vs Chappell wasn't the only one. All the rows and spats from the year gone by... 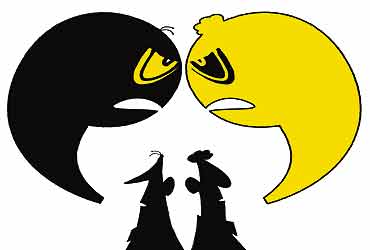 outlookindia.com
-0001-11-30T00:00:00+05:53
Sudershan vs Advani: Clearly, the biggest row of the year which will culminate only on the last day of '05. Relations between the RSS chief and the BJP president, never very cordial, hit a nadir when Sudershan said in an interview that it was time for Advani to make way. The comments on Jinnah brought things to a breaking point but an honourable exit was eventually hammered out.

Gandhis vs Bachchan: Comments by Rahul Gandhi on the Big B's relationship with the Gandhi family eventually ended up with Bachchan boycotting the film festival in Goa, although he was present in the city. And when Doordarshan downplayed his recent illness while satellite channels went berserk, the doubting Thomases were out in full force, attributing motives and the growing rivalry.

Buddhadeb Bhattacharya vs the Comrades: The sweetest irony of the year. The CM was changing labour rules for IT companies, coming down hard on protesters, gloating over Japanese FDI being the highest in Bengal, and asking why MNCs must be opposed if they create jobs. But in the...