Ricochets From An Old Gun

Tushar Gandhi's claim of Bapu's assassination as conspiracy is naive rather than new, and emotional 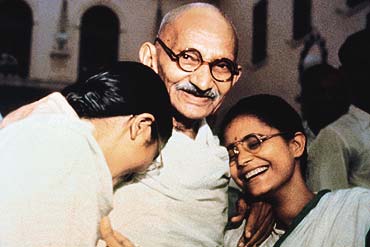 outlookindia.com
-0001-11-30T00:00:00+05:53
Books by Tushar Gandhi, great-grandson of the Mahatma, and Rajmohan Gandhi, Bapu’s grandson, are benefiting from the wave of Gandhi consciousness generated by the hugely successful film, Lage Raho Munnabhai. Both Gandhi heirs have taken the great man off the pedestal on which post-independence generations have placed him, Rajmohan by giving us Mohandas: A True story of a Man, His People, An Empire, Tushar by giving us the story of Let’s Kill Gandhi! A Chronicle of His Last Days, the Conspiracy, Murder, Investigation and Trial. Rajmohan, an established scholar of contemporary India, broke new ground in Gandhi scholarship by featuring Gandhi’s private life, including re-examining his relationship with Rabindranath Tagore’s niece, Saraladevi. Rajmohan Gandhi has a well-deserved reputation as a scholar of contemporary India and his book enhances that reputation. The younger Tushar has hitherto been known for gaining possession of an urn containing the residue of his great-grandfather’s ashes and immersing them in the Ganga at...

More from Lloyd I. Rudolph