Many of us in the media have forgotten the power we wield. A casual statement, retracted later, can devastate someone's life. 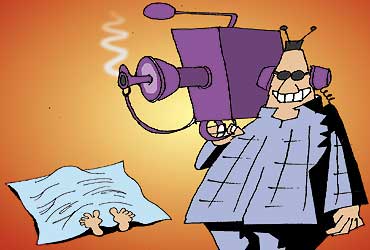 outlookindia.com
-0001-11-30T00:00:00+05:53
Natasha Singh was one of my closest friends. Besides dealing with the tragedy of her shocking death, the most difficult part for her family and friends perhaps was coming face to face with, for lack of a better way to describe it, the media witch-hunt. Sunday morning, when we reached Hyatt Regency to identify Natasha's body, the first thing a senior police officer told us tersely was "she's been murdered...shot thrice in the back".

Dealing with the shock of that and then informing her mother and brothers in Goa was hard enough. Worse still was the full-fledged media assault that was unleashed. An assault which meant her brothers had to first see their dead sister wrapped in a white sheet on a stretcher and then have enthusiastic cameramen having the shroud parted to reveal her battered face in close-up. The image beamed relentlessly into drawing rooms across the country as part of a 24-hour breaking news cycle. People who had no idea as to who Natasha was when alive suddenly knew every gruesome detail about her death.

As news editor of a 24-hour news channel, Natasha's...