Red Ants In Their Whey 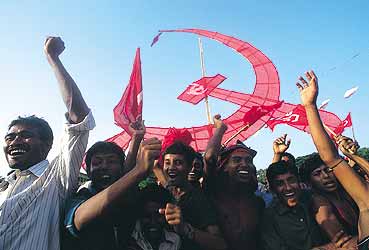 outlookindia.com
-0001-11-30T00:00:00+05:53
West Bengal chief minister Buddhadeb Bhattacharya is always in immaculate white, but he's finding it hard to hide the stains lately, running his state from Writers Building. The bloody violence that marked the fortnight before the panchayat elections will haunt the Left Front government for a long time to come.

At a recent public meeting in Amdanga, North 24 Parganas, the CM promised: "Please cast your vote on May 11. Our panchayats are our pride, we will further empower them." But even with the wave of red flags, Buddhadeb was aware the bloody run-up to the polls had decisively marred his government's public image.

In fact, the aggressive build-up had little to do with empowerment. Instead, it was a desperate attempt to ensure a Left Front (LF) victory at any cost, to crush the Opposition with an open display of money and muscle power. Any reference to local development or democracy was just half-hearted rhetoric; neither the politicians nor the voters took it seriously. It was goonda raj all the way.

So much so that till May 7, 22 people had been officially...