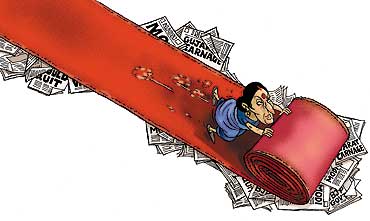 outlookindia.com
-0001-11-30T00:00:00+05:53
In a stealthy move which caught both big media houses and the swadeshi lobby off guard, the cabinet railroaded through a proposal lifting restrictions on foreign direct investment (FDI) in the print media last week. This, despite dissent within the cabinet and protests from almost all NDA allies and Opposition parties alike. The decision also flies in the face of recommendations from the parliamentary standing committee on information technology and the Indian Newspapers Society (INS), not to mention journalists' unions.

But why did the cabinet push through the proposal in such inexplicable hurry? The simplistic explanation is that Prime Minister A.B. Vajpayee has finally yielded to pressure from a small clutch of newspaper owners starved for finances and looking towards an inflow of foreign funds. But, according to an official in the PMO, the unusual hurry was prompted by the thinking in the government that three large newspaper organisations which were very critical of the government had to be bridled and taught a lesson. Says the official: "It is not Gujarat but in other...