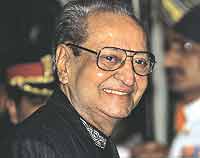 Was your entry into films premeditated?
No, it was a coincidence. I had to earn a living. I was disinterested in academics and completely uninterested in films—I never even saw films, let alone wanting to act in them

Did you ever play hero?
Yes, I did—in Khandaan in 1942 opposite Nurjehan. She was merely 13 years old.

How much would you say Lahore contributed to your persona?
People from Lahore have a certain stamp of sophistication—if you lived there you'd never forget it. And, of course, my film career started there.

Your earliest memories of Bombay?
I lived at the Taj. It was just Rs 55 for a suite and all meals.

Are you satisfied with your biography by Bunny Reuben which is just released?
It's a good book.

What would you consider the major highlights in your career?
My first...