The blasts probe is narrowing down to the NDFB. Will it be proved? 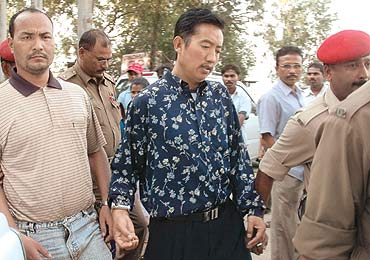 outlookindia.com
-0001-11-30T00:00:00+05:53
It took exactly 11 days for IGP R. Chandranathan and his colleagues in the Special Investigation Team (SIT) to conclude that a cocktail of terror elements were behind the October 30 serial blasts in Assam that killed 89 and injured 800. Now, nearly a month after the attacks, the SIT is convinced that the main player in the bombings was the outlawed National Democratic Front of Bodoland (NDFB), an insurgent group seeking an independent Bodo tribal homeland. The group has had a ceasefire agreement with the Centre since May 25, 2005. The SIT feels the NDFB was "backed by the ULFA, and certain forces based in Bangladesh".

The NDFB, formed in 1986, has in the past indulged in killings, kidnappings and extortions, even bomb explosions. Now, it is being directly implicated in an attack of such magnitude, which is in complete violation of the ceasefire. Documents with the SIT, some of which are with Outlook, show that the three Maruti cars used in the explosions in Guwahati have been traced to NDFB cadres who had purchased/driven them to the...