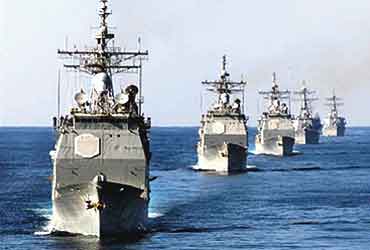 outlookindia.com
-0001-11-30T00:00:00+05:53
This must be the first case of serious organised spying on the Indian navy to come to light in the last decade. Last month, naval headquarters dashed off a detailed note to the ministry of defence (MoD) raising serious objections to an American warship spying consistently for several months in 2002-2003 and carrying out unauthorised exercises off the Visakhapatnam coast well inside India's exclusive economic zone (EEZ). The area under survey was too close for comfort to the strategic naval base at Visakhapatnam. The spying operations were conducted under the garb of 'research' and without prior permission, flouting all rules of engagement. Such 'intrusions', say senior naval officers, could well lead to a compromising of India's security.

The detailed note from naval headquarters to the MoD (accessed by Outlook) raises serious concern about the presence of American warship USS Bowditch in India's EEZ. The warship, ostensibly granted rights to conduct 'survey and...