The posturing of the few only highlights that 10 years on, the BJP has cynically jettisoned the temple plank as no longer politically cashable More Coverage 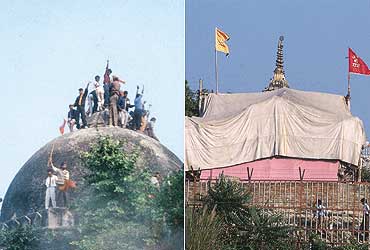 outlookindia.com
-0001-11-30T00:00:00+05:53
One would imagine it would be a day of quiet celebration for the BJP. When privately, if not publicly, partymen would gather in quiet conclaves to celebrate the day the BJP announced its arrival on the national stage: December 6, 1992. The day the demolition of Babri Masjid became a symbol of the emergence of the Hindu right.

But the reality is quite banal. As far as the BJP is concerned, there will be no special gathering of the faithful to mark the tenth anniversary of December 6. A decade after the mosque's demolition, the construction of the Ram temple is no longer a top-of-the-mind issue for the BJP. Its manifesto still remains committed to the construction of the mandir but the BJP evades the issue by claiming its hands are tied by the common minimum programme of the nda.

Swami Chinmayananda, the BJP MP from Jaunpur, puts it succinctly: "There is no political gain in trying to revive the movement now. After all, circumstances have changed since then. But if the government comes up with a solution to the impasse, everybody gains." BJP general secretary Mukhtar...