India, China do set a rapport, but move warily on key issues 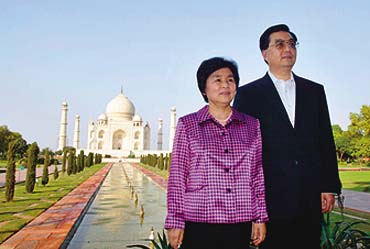 Why was Hu's visit significant?
Seeks to address trust deficit between the two countries through increased political engagement, people-to-people contact, and trans-border connectivity.

Was there any nuclear angle?
Yes. China and India have agreed to cooperate in civil nuclear energy-both bilaterally and multilaterally.

Does this mean China won't play a spoiler in the NSG?
Early days yet. Hu didn't comment on it.

What about the border issue?
Timeframe hazy, but negotiations will accelerate, maps will be exchanged. PM says "no movement of populations".

When UPA chairperson Sonia Gandhi called on the Chinese President on Tuesday, November 21, she found an extremely animated Hu Jintao, someone who's famous neither for flamboyance nor loquaciousness. Yet, as the 30-minute interaction progressed, it was obvious the Chinese leader seemed gung-ho on his country's relationship with India. So...