R.K. Sharma is in custody. But the tough top cop is not one to succumb to Delhi police's psychological tactics. More Coverage 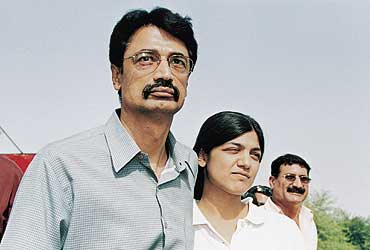 outlookindia.com
-0001-11-30T00:00:00+05:53
Suspended Haryana IGP R.K. Sharma, the main accused in the murder of The Indian Express reporter Shivani Bhatnagar, is proving to be a hard nut to crack. After a week of intensive questioning, the interrogation team has failed to break any new ground in this high-profile case. This, despite intense psychological pressure mounted on Sharma by sleuths who are confronting him with the other co-accused in the case. At the end of the week, senior police officials privately admit that they seem to be up against a seasoned master of interrogation, who is taking the police team around in circles without giving anything away.

Says one of the officials interrogating Sharma: "Given the fact that he (Sharma) himself is an ips officer, it would be very tough to crack him using conventional methodology. He knows every remand trick we employ. So, we are trying out new methods to break him. But it is not going to be an easy task."

In fact, Sharma, who surrendered before an Ambala court on September 27 after evading the police for two months, has been baffling his interrogators...