Paradise At A Premium

Sadly, we have a national character to be ashamed of. But no attention is being paid to it, forget about planning to change it. 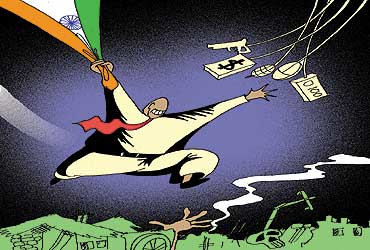 illustration by Sandeep Adhwaryu
Madhu Trehan May 27, 2002 00:00 IST Paradise At A Premium

outlookindia.com
-0001-11-30T00:00:00+05:53
Out of the numerous letters I received on my last article, there was one that was critical and set me thinking. It read thus: "What would have made more sense is putting some thought as to why we are the way we are?" First and foremost, what are we? After some research, I found there is hardly anybody who has documented the psychological changes of Indian men and women post-independence. And, there is no doubt, we have changed drastically.

The caricature of the post-colonial man is pretty clear. He still carried the British accent as far as possible, still spoke of duty, principles, courage, and still viewed British education, British medicine, British literature, British manners as the best. He was uncomfortable with the White Man, but ingratiating. He was derivative and always emulating. He was also uncomfortable with anyone who was just too "native". V.S. Naipaul exemplifies that psychological mindset. There was corruption, but on a small scale. He could be called the Nehruvian Man.

Then came the Indira Man. Sycophancy became a cottage industry,...