'Our Industry Has Had Only One King: Mr Bachchan'

'It's been 40 years and he is still ruling,' says the man everyone is calling the new King. 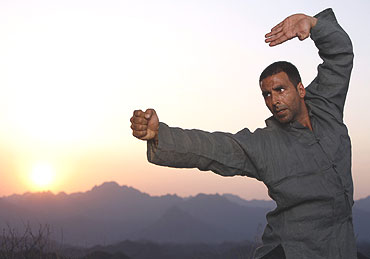 outlookindia.com
-0001-11-30T00:00:00+05:53
Outlook catches up with an audibly happy Akshay on the phone just before he is walking in for the Singh is Kinng success party at a Mumbai five-star hotel. Immediately thereafter, he is to fly off to Monte Carlo for a family holiday, something he had been planning since January.

You seemed pretty confident of the success of Singh Is Kinng. It was evident in the way you promoted it so aggressively. What made you so sure?

I was not sure at all. It is our first home production under the banner Hari Om Productions so I did a little bit extra for it, did a little more than I normally do. Am glad it has been received so well, that the first film from a production house named after my father has become the biggest hit of recent times. The confidence came only after the release. I get very edgy on the day of my film’s release. My wife stays away from me, gives me a breather. It’s only now that I am relaxed and going for a holiday.

But you have hardly been in the country this year, always traveling on...