One Word, Many Meanings 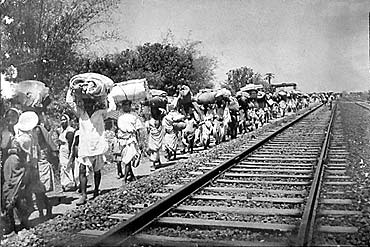 outlookindia.com
-0001-11-30T00:00:00+05:53
Qurratulain Hyder died a fortnight ago. Her novel Mere Bhi Sanam Khane portrayed the sparks of Partition blowing up the pathways of a composite culture, leaving a yawning gap of burning dust. Some of the writings of Intizar Husain, now in India as a Sahitya Akademi guest, reflect how an ongoing cultural process was stalled in "a very unnatural way" by a few Muslims and Hindus who, with their puritan frame of mind, contributed to the tragedy of Partition.

To survey the making of Pakistan as a whole, to discover trends in the Partition movement and to seek out its meanings, Yasmin Khan is not the first to make the attempt. Why, then, another tome? Partition, she writes, deserves closer attention as one of 20th century’s darkest hour. It is a loud reminder of the dangers of colonial interventions, and the profound difficulties that dog regime change; lastly, it is "a testament to the follies of empire, which ruptures community evolution, distorts historical trajectories and forces violent state formation from societies that would...