Bollywood might slip on creativity, but who's blamed? We the Critics. 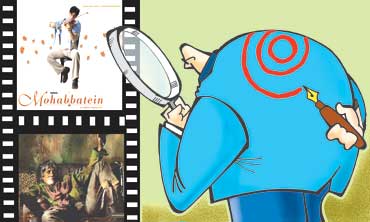 outlookindia.com
-0001-11-30T00:00:00+05:53
Aditya Chopra, the Invisible Man of Bombay moviedom, doesn't exchange a syllable with me after a thumbs-down on Mohabbatein, seven years ago. Before that, Prodigy Chopra was as accessible as the fire brigade service. The Bachchans love you to love them. But bring up touchy points in the course of cobbling a coffee-table book on the Big One, and comes the Dolby drawl. "Don't behave like a journalist." Hello, some brand identity confusion there.

Actors are especially vain creatures-fault anyone's diction, attitude, whatever, and he'll cry f*@* shit. Aamir Khan bans press, then courts press with Capuccinos Zameen Par. Point out that a script wasn't up to much and you're erased, nay Anarkalied, by Prince Salim Khan.

Lyricist Gulzar, after a difference of opinion, goes blind as a bat on colliding into you at a soiree. Director Ram Gopal Varma turns silent as a tomb for months (years), to resurface chummily on the eve of the release of one of his underworld slugfests.

Kajol takes up violent cudgels for a performance by Ajay...